Source-Connect for Voice Over

I’m pleased to now offer to live directed sessions with Source-Connect for voice over. Robert Marshall, Co-Founder of the Source-Connect company, Source Elements, went above and beyond with a call to go through the set up, use, and features of this powerful ISDN replacement tool. While I use REAPER as my DAW, it is fully supported by Source Connect. We successfully tested the remote control video sync playback for dubbing.

Speaking of dubbing, that’s part of the reason why I’m going with Source-Connect for voice over and no longer subscribe to ipDTL. I love ipDTL, and it’s a fantastic tool for podcasting and broadcasting. But, it doesn’t have video playback for dubbing/ADR. I paid for the full package for ipDTL, including the dedicated Los Angeles ISDN number, and none of my clients wanted to use it.

In fact, my European clients who had both ipDTL and the similar SessionLink Pro were using the latter exclusively over ipDTL. They found their SessionLink Pro connections to be better and of higher quality with fewer artifacts, and we could do video playback with it. 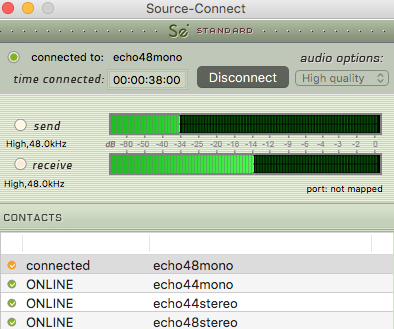 Ease of Use for Remote Voice Over Sessions

This brought me back to a core value: providing the right tools for my clients. If a client wants to do an ipDTL session and they own a subscription, I can still log into their session. But choice isn’t mine as the voice over talent. Over the years, I managed to encourage a few corporate clients to try ipDTL; but in general they are not interested. Lately, they prefer to use Go To Meeting or Skype for Business because most of these projects require conference calls hosted in an office, not in a production studio.

ipDTL confused too many of my corporate clients. Podcasters and broadcasters understand it, but not business people. It took me an hour once to show a video game producer in the UK how to set up her laptop for ipDTL. And on top of that, the Opus Codec on which ipDTL runs is highly unreliable on Windows 10 for a substantial number of users. Note that on September 18, 2018 they launched a big update of Opus Codec which hopefully fixes many issues. Check my previous post on alternatives to Chrome for Opus Codec streaming.

Source-Connect is the Right Tool for My Clients

I realized that my Corporate, E-Learning, and Explainer Video clients don’t need ipDTL at all. My studio is covered for them with phone patch or Skype, Go To Meeting, and so on.  But for commercial, animation, and dubbing, I need the right tools. Those tools are ISDN and Source-Connect. Major American production studios have adopted Source-Connect; and accept them going through their firewalls, which is not the case with Opus Codec solutions. As for ISDN, I have access to many nearby Atlanta recording studios for ISDN sessions. From my own studio, I’m happy to offer Source-Connect for voice over. An added bonus I can offer for live sessions is with my Yamaha MG10XU USB mixer, I can playback takes on demand whether using Source-Connect, ipDTL, or SessionLink Pro. It’s all about having the best tools for my clients.

All the best,
Lance

A Full-Solution Mixer for the Voice Over Studio

Voice Over Talent and some producers and directors ask me “How Do You Playback Audio to Voice Over Clients?” for remote recording sessions. Yamaha recently released their new small format audio mixers in the MG line. I’m pleased to report that my MGX10U is an all-in one solution for the voice over studio that makes audio playback easy. It has:

1.) Great sounding mic preamps that are clean and have great headroom
2.) Solid USB Interface with nice converters. They’re same ones found in Steinberg interfaces: yes, Yamaha makes those.
3.) Ability to playback any computer audio source to a director/client (including your DAW) without extra routing. Just press the red button on channel 9/10 when you need to play audio down the line.

I added it to my voice over studio because I wanted a 2-in/2-out USB interface like the Focusrite Scarlett but with better preamps. Unfortunately with Scarlett interfaces, even when one goes line-in from an external preamp on the bigger Focusrite models, the audio still goes through the Scarlett preamp. That’s not terrible, but I wanted something better, with the ability to run a gentle 80 Hz HPF as I recorded if possible. The MG10XU mixer is an audio interface and preamp all-in-one. And yes, the preamps, conversion, and playback all sounds better than the Scarlett. As a bonus, it’s not huge or heavy, and can fit easily in a briefcase for travel.

The Game Changer: Playback any Audio to Your Clients

But this isn’t just a Yamaha mixer, it’s an invaluable voice over tool. You can playback any audio source from your computer to the client without doing any routing tricks. The 9/10 Channel controls the playback from your computer…and it goes right back down the main output as long as the red button on that channel is switched from Monitor to Stereo output. So anything you just recorded in ProTools or Audition you can just cue it up and play, and control the output with the volume pot. Any streaming sound from YouTube or Vimeo can go down the line too. This works with all the remote recording solutions like Source Connect, ipDTL, Skype, and SessionLinkPro. If the client can hear you, they will hear the playback on command.

Update: I discussed this with voice over tech guru George Whittam and he said that the Yamaha AG03 also has this ability in a smaller travel-size mixer for half the price. If you don’t need the extra inputs and additional routing then the AG03 is a great solution also. I think I’ll be getting one for my travel rig!

Why You Need Alternatives to Chrome for Audio Streaming

There are many resources now for streaming audio over an internet browser, such as ipDTL, SessionLinkPro, and Bodalgocall. While conventional wisdom says to use such streaming services on a Chrome browser, that’s not necessarily your only, or best, choice. There are now also many alternatives to Chrome for audio streaming voice over studio connections. Chrome uses the Opus Codec for streaming audio, but what is Chrome? It’s an Open Source Chromium browser. The difference between a Chrome and Chromium browser is well explained in this How-To Geek article. There are many of those other than Chrome, and they’re not made by Alphabet / Google. So, in fact, you can use these services in most cases with any Open Source Chromium browser such as Opera or Yandex. I was the first voice over talent to test ipDTL on either of those browsers and I regularly run my sessions with the Opera browser. But why would you need alternatives to Chrome for Audio Streaming? Consider the following four points:

Outside of Opera and Yandex, there is another Chrome solution other than the latest Chrome browser. The support staff at ipDTL recommends using the M57 and not the latest version of Chrome. ipDTL has also released stable Chromium versions which are free to download at the Facebook ipDTL Users Group. Join up, and then search for Chromium Browsers. I highly recommend the group for all your technical questions related to ipDTL, and they’re very quick and helpful with their responses.

As for the Edge browser, they’re getting closer to supporting Opus Codec for streaming but dragging their heels. Recall that a few years back Microsoft promised a Skype TX high-quality audio streaming voice over service but that was all hype and no action. Not even an alpha version was developed. So, don’t hold your breath for that.

However, Firefox has upped their game in so many ways with the new Firefox Quantum browser. It’s fast, stable, and works with almost any application or site. Most of all, while Firefox has supported Opus Codec since 2012, it now supports audio streaming solutions. I’ve successfully used it on many sessions on Windows 10 with ipDTL and SessionLink Pro. Still, there is not complete support/compatibility with Firefox Quantum, but it’s very close. I asked Kevin Leach of In:Quality, the company behind ipDTL and he replied:

“Frustratingly, Firefox has always been slightly behind the Blink based browsers such as Chrome in terms of what we need to get the best out of ipDTL. That said, it’s come on some way recently and you can now run ipDTL in Firefox with just a couple of limitations, and this is a neat solution for those who have had audio problems between Chrome and Windows 10.

We’ve actually been throwing some of our own development effort into Firefox recently – as its open source structure allows us to do so – which should hopefully see things like output device selection being possible in the near future. This means that we’ll soon be able to announce full support for Firefox in ipDTL, allowing for greater flexibility in browser choice. Our contribution here will also benefit users of ipDTL ‘lookalike’ apps.”

So there you have it. If you need alternatives to Chrome for audio streaming voice over studio connections you have several choices: M57 Chrome, Custom Chromium, Opera, Yandex, and Firefox Quantum.
Good luck, and here’s wishing you a great session!